Spiders and Bats in Preschool

One of our recent preschool themes was spiders and bats. The children learned some basic facts about each animal and we enjoyed lots of learning activities, art and crafts. 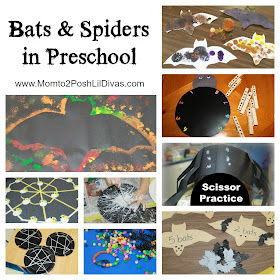 Literacy
Spider Web Alphabet Game
I made a large web on the floor out of tape. We used it all week in different ways. The children balanced on the lines and walked the web, we danced on it and we played some games with it.

One of the games we played was an alphabet review game. Since we learned that spiders eat insects, I used some bee cutouts as our playing cards. I wrote the letters of the alphabet on the cards and placed them throughout the web.

To play the game, I would call out a letter and the children (who were the spiders) had to find it on the web. Once the bee (letter) was caught, they got to eat it (keep it). It was a fun way to review our letters and see which students could recognize them. 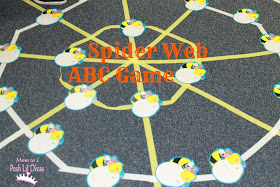 Math
(Number Recognition & Counting)
Bat Counting
I found little plastic bats at Walmart and scooped them up so the children could play with them. I wanted to make a quick independent learning game for them and decided to use them for number recognition and counting. I drew and cut out some large bats and then numbered them from 1 to 5. I put the correct number of plastic bats needed on the table as well. The children had to place the correct number of plastic bats on the numbered bats. This was a great independent or small group activity. 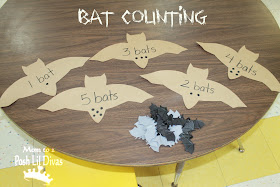 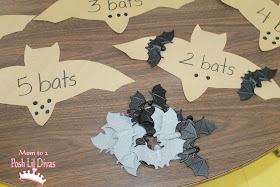 Clothes Pin Spider Leg Counting
I used black paper plates and construction paper to make quick spiders. I added number stickers from 1 to 8 for the legs. The legs were clothes pins with dots from 1 to 8. To play this game the children had to count the dots on the clothes pins and pin them to the correct number on the spider's body.

This was a counting, number recognition and fine motor activity all in one for my preschoolers & it only took me mere minutes to put together. 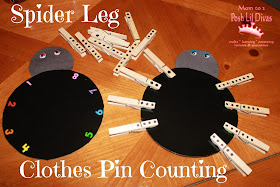 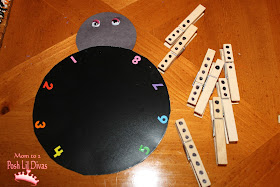 Patterns
During the week we learned that both bats and spiders eats insects so I thought it was appropriate to let the children play with our plastic patterning bugs. I provided pattern cards that they could use but they were free to make their own patterns, sort the bugs (by color, size, bug type, etc), use pincers to move them around or just play with them. We have bugs that click and flip when pressed down - those were a huge hit. 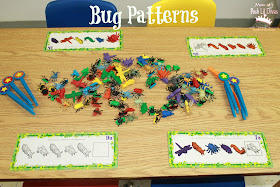 Fine Motor
Scissor Practice Spider Hats
One of the facts we discussed about spiders was that they have 8 legs. To help the children remember it, I had them make spider hats to wear. They cut 8 legs from black construction paper and we attached them to large strips of paper fitted to their heads and they drew eyes with white chalk. The hats were adorable and they were a great way to reinforce what we learned about spiders and sneak in some scissor practice too. 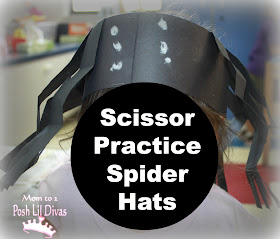 Spider Bead Bracelets
My preschool girls love dress-up, jewelry, etc. They really enjoyed making our Friendship Noodle Necklaces so I knew they would like to bead some bracelets. I have tons of plastic spider rings from last Halloween and I thought they would be a cute addition to our bracelets - making them Spider Bracelets.

I provided colored beads, pipe cleaners and spider rings and let them make their bracelets as desired. 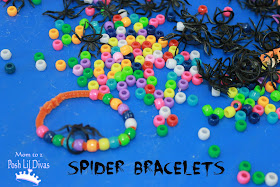 Paper Plate Web Weaving
A classic activity but it's always new to preschoolers and such a great fine motor activity. I cut slits in black paper plates and provided a long length of yarn. To make it easy I tied a knot in one end of the yarn and put it through one of the slits to start the weaving off. Some of the children picked it up quickly and did a great job of weaving all around the plate, some kept weaving through the same few slits and a few needed some help to even get it done. 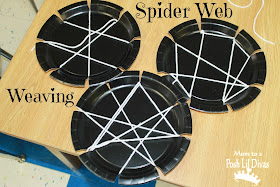 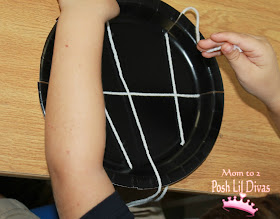 Art
Yarn Paint Webs
Last year I did marble paint webs with the Lil Divas but after just having done cob roll painting which is really similar I wanted to give my preschoolers an opportunity to try something different. I decided to try string/yarn painting. It was messy, tactile and fun - perfect! I put white paint on some plates, cut yarn in various sizes, provided black circles for the webs and let the kids go for it. 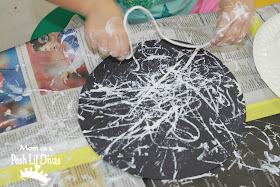 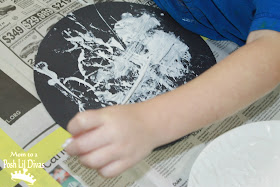 Koosh Ball Paint Bats
I am always looking for fun textures and new ways for the children to paint. We have these awesome koosh balls and koosh ball rings that are just so fun, I knew the kids would enjoy painting with them. 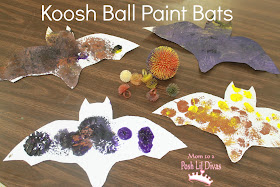 I encouraged them to paint all around the outline of the bat on the black construction paper. 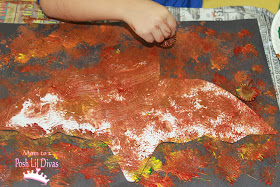 This gave us a 2nd piece of art that was stunning. The bat outline remained on the splatter painted black construction paper once the bat template was removed. 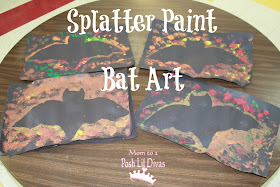 It was a fab bats & spiders week in preschool. Join us next week for some Monster Fun & don't forget to check out all of our previous Preschool Classroom Sneak Peaks.

Thanks for taking the time to visit Mom to 2 Posh Lil Divas! I hope you will stay awhile to explore all we have to offer!